I’m very excited to announce that we have a major new version of the ADF Performance Monitor – version 9.0 !

We have added many valuable new features; new metrics that can detect and help explain poor performance, disruptions, hiccups, and help troubleshooting ADF applications. Like operating system metrics: the CPU usage of the ADF application, the total CPU usage of the whole underlying operating system, the total used and free physical (RAM) memory of the whole system, and the Linux load averages. A high CPU usage rate and memory usage may indicate a poorly tuned or designed application. Optimizing the application can lower CPU utilization. Generic APM tools have these kinds of metrics too in some way, but the combination of system metrics with ADF specific metrics of the ADF Performance Monitor makes it even more possible to relate performance problems.

Another reason to pay attention to system metrics is that nowadays more and more applications are deployed on the cloud. Very likely there will be shared virtual machines and resources (CPU, memory, network). Applications and processes could influence each other if frequently other processes have a very high usage of the available CPU or memory capacity.

This blog (part 1) describes the first part of these new features. Part 2 describes the CPU execution time of individual HTTP requests and click actions. It answers the question: “What request/click action in the application is responsible for burning that CPU ?

All critical IT infrastructure devices contain a central processing unit (CPU) that ultimately dictates the performance, stability, and performance capacity of the device. Overall machine performance is often influenced by many resources, such as physical memory, disks, network, external services, the quality of the software, etc. CPU utilization for servers is typically the primary metric that indicates current system performance levels as well as available capacity.

CPU performance latency occurs when one or more processes consume most of the processor time. Threads that are ready to be executed must wait in a queue for the processor to become available. Trying to overcome a processor bottleneck by throwing hardware at the problem (e.g., more CPU, more memory, faster disks, more network connections) will often not help.

Monitoring CPU usage helps you to analyze spikes in CPU load and identify overactive CPU usage. Depending on the CPU performance behavior, you can:

The monitor shows on day, hour and minute overviews:

Another example in the following hour overview screenshot: 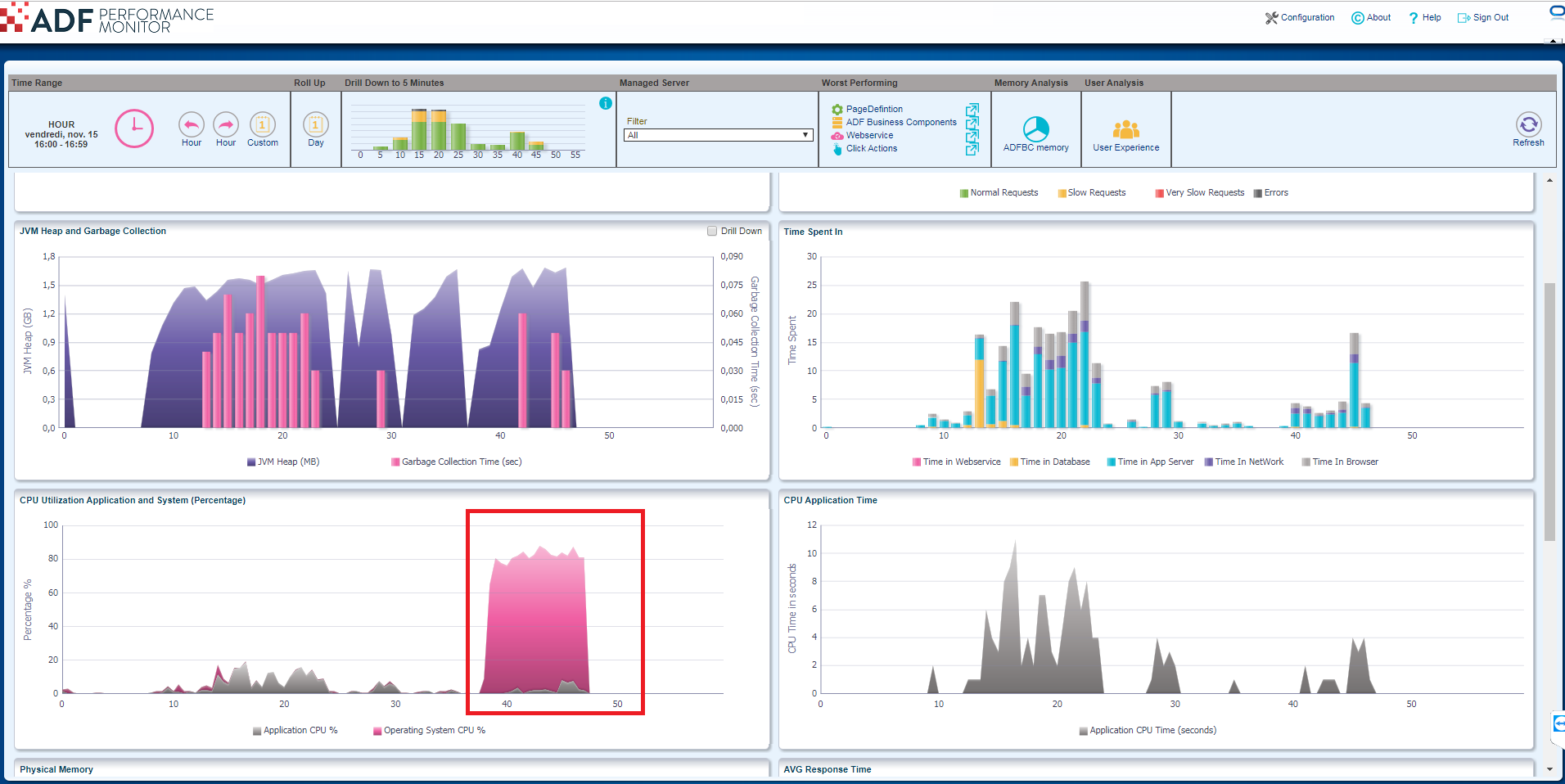 In this case we had a Linux server where an ADF application was deployed on, but also a Jenkins server. A Jenkins job was executed from 16:38 to 16:48, that took temporarily more than 80% of the total system CPU load for 10 minutes. This was on a test server, but if this happened on a busy production server under high load, the end-users would very likely have experienced slower response times than normal.

Just as important it is to monitor the JVM heap memory and garbage collections, it is important to monitor the whole operating system memory for over-consumption. How much is used, and how much is free? When an operating system is running out, it will go swapping memory in and out – this is expensive and resource consuming. It is better to avoid that. The ADF Performance Monitor shows the used and free system memory: 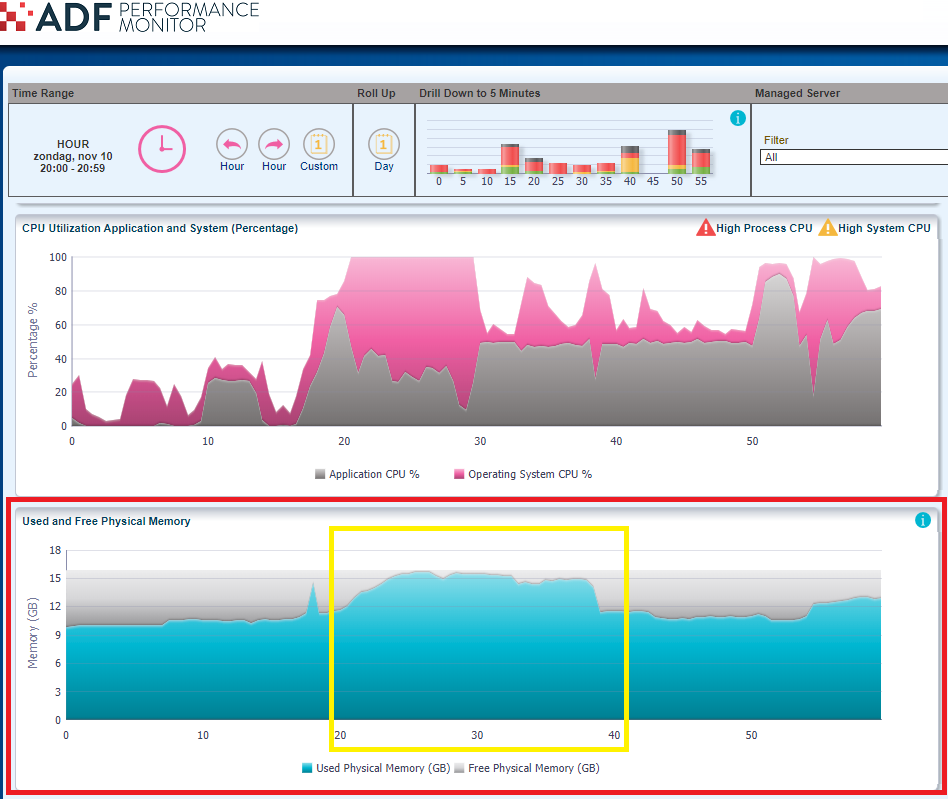 The overview above shows a lack of free memory from 20:20 to 20:38, and an increase in system memory usage to the maximum of 16 GB.

Read here an excellent article that explains Linux load averages in detail and its interesting history.

In part 2 of this blog I write on other new features of this major new release. It answers the question: “What request/click action in the application is responsible for burning that CPU ?

We have also a free 7-day trial, you can request it on this website at our main page (adfpm.com).

You can purchase a license of the ADF Performance Monitor at our order page.