Last week I was doing an extensive performance analysis / health check on a large ADF project, with the newest version of our ADF Performance Monitor product. In this performance assessment/analysis I have focused high-level on the most important performance bottlenecks. We could see in the ADF Performance Monitor that end-users experience very slow page load times, they were waiting much more than needed. This ADF application needed attention; it could run more efficient like nearly all ADF applications can. In this blog I describe some of my findings, maybe interesting for other ADF projects as well.

The first thing I always do is configuring the ADF Performance Monitor on all WebLogic managed servers (in this case 4) to have a complete overview of the performance:

In this case a typical daily performance summary was (top left section):

What already is strange here is that the AVG total time end-users needs to wait (0,57 Sec) is more than double the time the AVG process time by the application server (0,25 Sec)!

On the chart at the right bottom we can see the explanation for this. In this chart we see in a glance in which layer processing time has been spent; database (yellow), webservice (pink), application server (blue), network (purple), and browser load time (grey).

More than one third of the time spent in is grey, meaning that more than one third of the process time is spent in the browser! This is the time spent by the browser, after receiving the response from the server to build the DOM-tree, and rendering/loading the content. Also, as we can see the purple color representing the time spent in the network (HTTP request network time, HTTP response network time) is relatively high: around 1/6th of a request on average. This is far more compared to other ADF projects.

This is the biggest ‘bottleneck’. It turned out that Explorer 11 was the current (and the only installed browser) of all their end-users, installed on its Citrix workstations. Web applications in general, and ADF applications in particular, perform very poor in Internet Explorer (regardless of the version). This is because of the inefficient JavaScript engine and the very slow browser load time. My first recommendation: install and use Google Chrome or Firefox as web browser as these have a very fast browser load time, and very performance friendly browsers. My estimation is that this will improve the performance in general with at least 25% or more for this project. Read here more on browser load time in ADF apps. In generally it is a good practice to stimulate end-users to install and use use Google Chrome or Firefox for ADF applications.

The next analysis was an ADF click action analysis. A click action is the start trigger event of an HTTP request by the browser, by an action that a user takes within the UI. These are most often physical clicks of end-users on UI elements such as buttons, links, icons, charts, and tabs. But it can also be scrolling and selection events on tables, rendering of charts, polling events, auto-submits of input fields and much more. With monitoring by click action you get insight in the click actions that have the worst performance.

I go very frequently to this overview to see what click action has the worst performance (is responsible for the most total processing time, and thus where we can win the most in terms of performance): 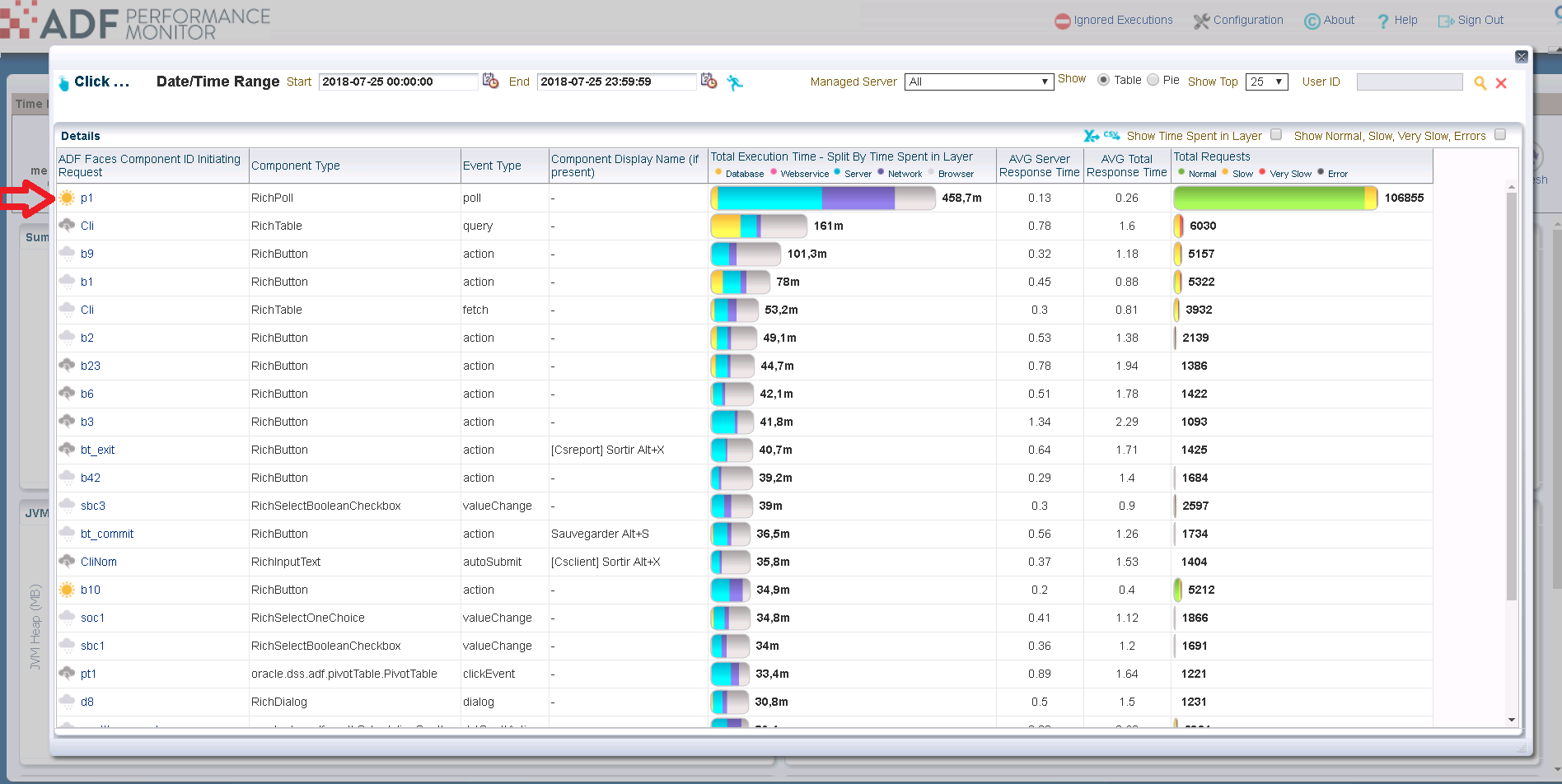 We see here that a poll event (ADF Faces component of type oracle.adf.RichPoll, with id ‘p1′) is responsible by far for the most total processing time (!). On this day there were in total 106.855 poll requests. That is more than one third of all the HTTP requests (296.435)!

There was a mechanism implemented in the application to force an end-user to be logged in at maximum one time. The way this was implemented was very bad for the server load; every minute a poll (HTTP request) was send to the WebLogic server that called Java code that updated a database table. It had also a side-effect that many end-user sessions were kept alive on the server for many hours (even for the many inactive users that never closed their browser window). The poll was responsible for the most time-consuming action in the application in terms of serving processing time. For now, as we couldn’t change this whole functionality quickly, we reduced the number of calls to three times less (one third now); we kept the same polling mechanism but now every three minutes (to avoid 2/3 of all the polling and to reduce the server load as well). Of course, later we should find an alternative solution.

We saw that the poll caused many very slow HTTP requests that included very slow database queries, frequent expensive ApplicationModule pooling, and other slow executions because it was restoring pages after passivation. It was responsible for 1/3 of all the processing time of the most frequent actions:

The third – a typical bottleneck in ADF – was an increase in response time (and decline in performance) because of the huge memory usage. The cause of this huge memory usage is that the application data which is retrieved from the database into memory is not properly limited; too many rows (thousands). To make matters worse, these rows and their attributes were retained in the session for an unnecessary period of time (by very frequent expensive ApplicationModule pooling). We can see in the ADFBC Memory Analyzer the total number of rows fetched by ViewObjects at runtime, and the maximum fetched rows. In this case we saw many ViewObjects fetching thousands of rows during an HTTP request: 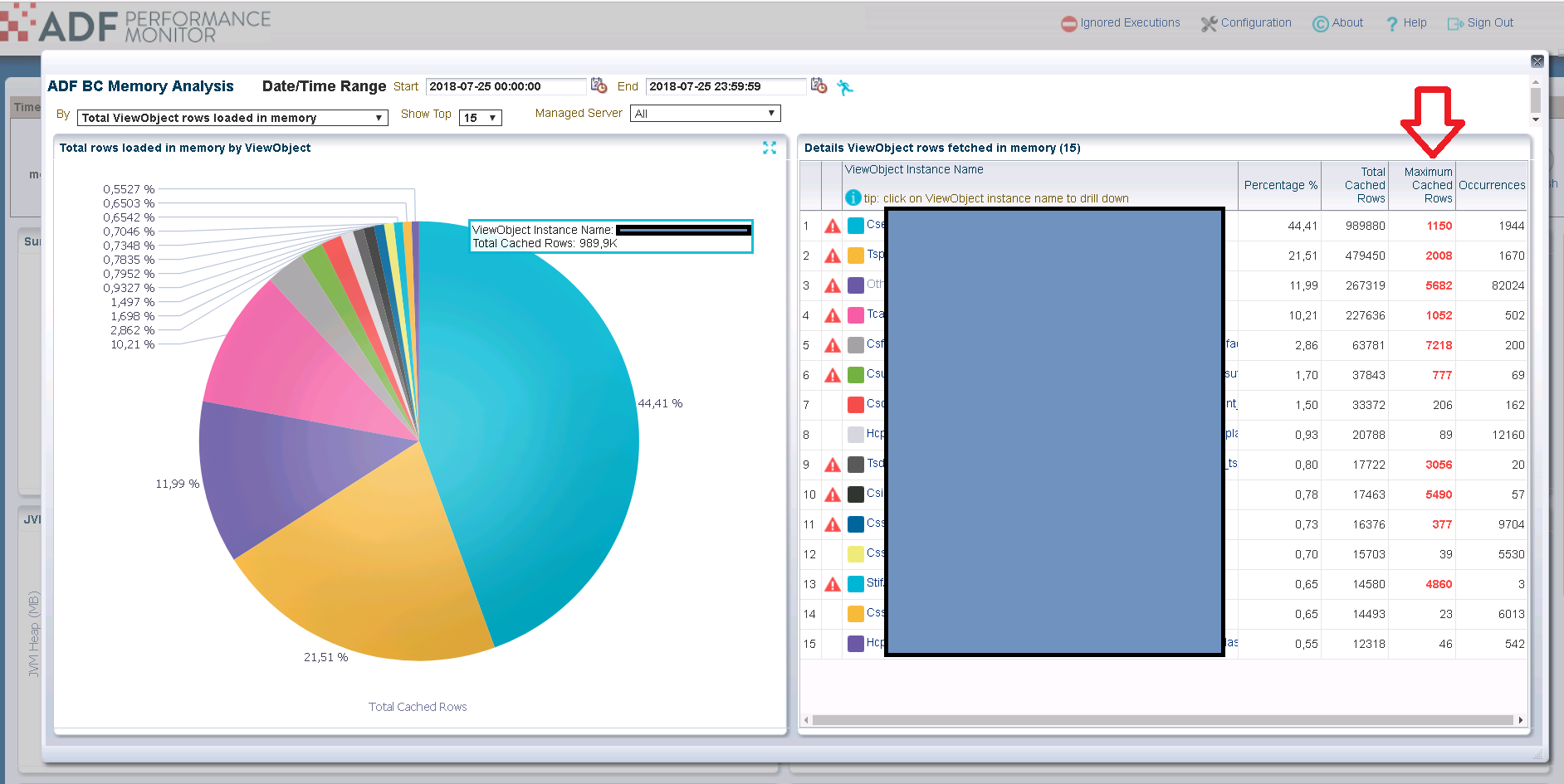 The solution of this main problem is found in reducing the size of sessions by decreasing of the amount of data loaded and held in the session (setting maximum fetchsizes, adding bind params, fixing ViewCriterias). We have already identified all the locations in the source code and solved the most important of this list. Read more on this subject here.

As you know ApplicationModule pooling is a mechanism in ADF that enables multiple users to share several application module instances. It involves saving and retrieving session state data from the database or file. This mechanism is provided to make the application scalable and becomes very important under high load with many concurrent users. The default values of ApplicationModule pools are far too small; especially if you have more than 10 end-users.

I think this is one of the most important things to ‘tune’ in general in ADF applications. Activations and passivations are the root cause of many very slow click actions. It is the root cause of errors after incomplete activations. In general, in my opinion it is better to try to turn off the whole ApplicationModule pooling mechanism – for so far as it is possible.

To do this we increased the size of all the ApplicationModule pools. In this way we make the application more scalable and avoid very expensive passivations and activations. We increased the following parameters – depending of the usage.

If you want to know more on ApplicationModule pools and tuning watch the video I made on ADF Performance tuning a few years ago (a big part of the video is on pooling parameters).

Problem 5: Too many UIShell Tabs Could be Opened Simultaneously

This was a UIShell application. To avoid resource (but also memory) overconsumption we reduced the maximum number of opened tabs from 10 to 5. This will reduce the resource and memory consumption of the server as well and force the end-user to close unused tabs (and free up resources).

We have found many other bottlenecks as well. But already addressing/resolving these 5 big bottlenecks we have put already a smile on the face of many end-users!