Recently I was analyzing and troubleshooting the performance of an ADF application. Much was already improved before I came. Due to a very recent new hardware/infrastructure environment, the server and database process time was nearly 50% faster after migration. In this blog I want to show you the impact it had on the total server process time of HTTP requests. Such a sudden improvement is visible in the ADF Performance Monitor in a glance, and in Week and Month trend analysis overviews. Maybe you need to investigate your hardware/infrastructure as well ,and consider an upgrade; if your hardware/infrastructure is relatively old, if your machines are full, or if virtualization software is not implemented efficiently.

Last week, on Wednesday the 6th of March, new hardware was implemented with SSD drives, and fresh installations of VM software were installed on the servers where the ADF application and databases were running on. After analysis of the performance metrics in the ADF Performance Monitor, we can conclude that the server and database process times were nearly 50% faster! This is not the first time I see this, so I decided to write on how important a modern, fast infrastructure is for ADF applications.

For example, look at this week overview by day from Monday 4 March to Sunday 10 March. On the top right, the server load is shown (by normal requests (green), slow requests (yellow), and very slow requests (red)) . The number of HTTP requests remain approximately the same during the working week days (Monday up to Friday). On the bottom right, a bar chart on the total process/execution by layer is shown: 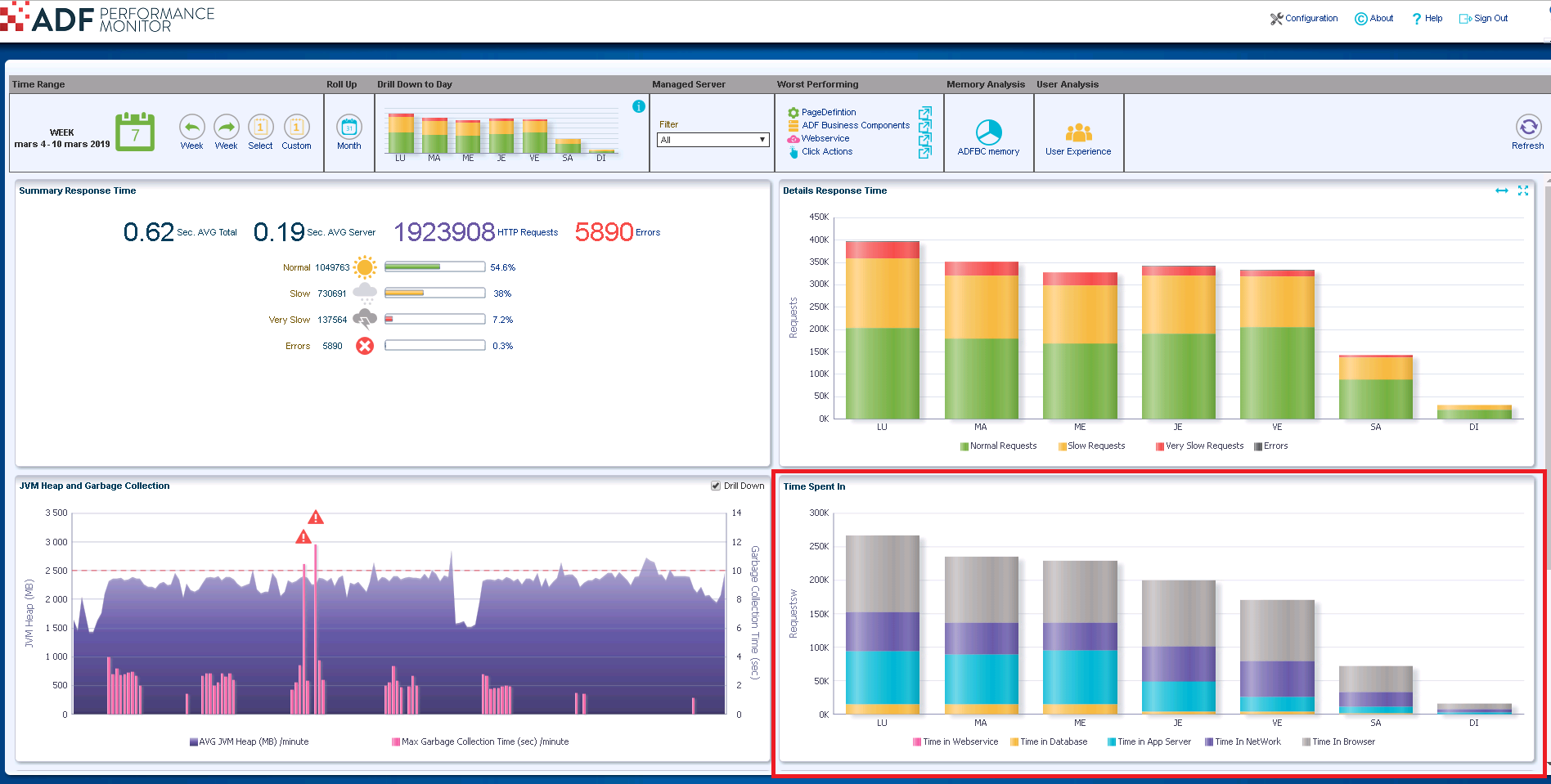 Until Wednesday the 6th, the total time spent in database and the application server is around 95k seconds. (By the way ME is abbreviation from the French Wednesday Mercredi). In the evening of 6 March 2019 this hardware/infrastructure change was implemented.

Let’s look a bit closer. From Thursday the 7th on, this time was reduced to around 50k seconds !  (JE is abbreviation from the French Thursday Jeudi)

The weekend days Saturday and Sunday I’m not counting due to little server load.

The same pattern in the Month overview of March: 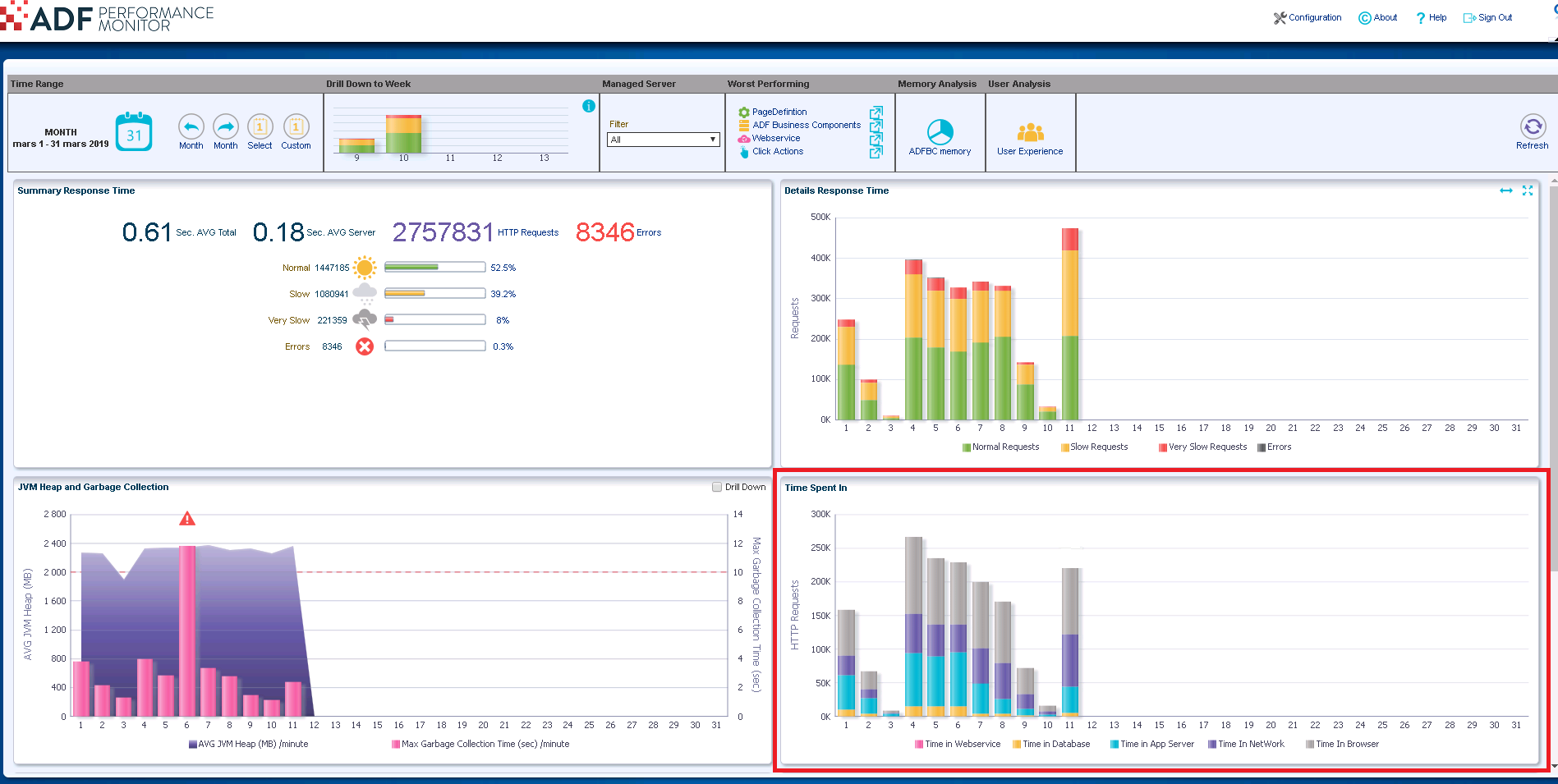 If we look a bit closer here it becomes also very clear here – even more if in the bar chart the time in browser (grey) and network (purple) are being turned off (deselected in the legend). Now the chart shows only the time in the application server (blue) and time spent in database (yellow). An even more clear giant impact is visible! Server and database process times are nearly halved:

This big performance improvement was also visible in the total average response time (including request/response network time and browser load time). And in the 50th –, 90th –, and 95th percentile values (read here more on percentiles). We can see in the month overview on the right bottom chart that this change was structural:

If we drill down, we can see that the total average response time (including network and browser load time) is now also around 15-20% faster (blue line), and the 50th- (black), 90th- (dark grey), and 95th (grey) percentile have gone down significantly:

This blog is on this hardware change. As a side note, as you can see in the screenshots, currently by far the biggest bottleneck of this ADF application is the browser load time and after that the request/response network time. In this case all end-users were forced to use Internet Explorer 11. More than 55% of the total response time is render-time (grey color in screenshots time spent in layer). Other modern browsers like Google Chrome or Firefox can do the same page rendering/loading in only 5% to 10% of the time. The second big bottleneck is their network (purple color). Around 25% of the total time is spent in the network from and to the browser (request network time, response network time). These two (browser and network) are the two most important bottleneck, but not the subject of this blog.

Carefully evaluate your hardware and software infrastructure. Especially if it is quite old, or if the server is very full, or if you suspect infrastructure software is not implemented efficient. You have a big chance that an upgrade will result in a much better performance !